It's Murder on Mykonos...

I'm delighted to be posting another in my occasional series of interviews with authors whose work carries a decidedly Greek theme. It's been a while, but I felt it was becoming perhaps just a little too quick and often before.

This time though, it's back with a bang, because I'm thrilled to say that I've recently 'virtually' sat down [across a couple of continents] with Jeffrey Siger, and below is my in-depth interview with him. 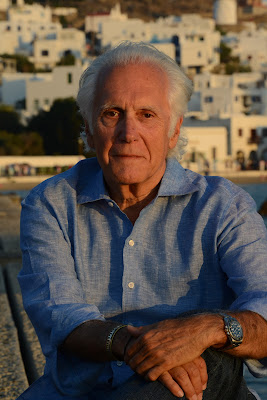 In the extremely unlikely event that you are not aware who Jeffrey is, his extensive answer to question 1 in the interview below will surely enlighten you!

1. Tell us a little about who you are, where you grew up etc.

I am an American living on the island of Mykonos, a place I’ve considered home since first setting foot there some 35 years ago. A Pittsburgh native and former Wall Street lawyer, a dozen years ago I gave up my career as a name partner in my own New York City law firm to live in Greece half the year and write mystery-thrillers.   Some Mykonian friends told me if I started sprinkling murders with a message across my adopted country's tourist paradises, I'd likely be banished, if not hanged. No one was more amazed than I when my debut novel, Murder in Mykonos (a sort of Mamma Mia setting for a No Country for Old Men story), became Greece's No.1 best selling English-language novel (and a best-seller in Greek, as well).

As of January 2018, I have nine Greece-based Chief Inspector Andreas Kaldis novels out there, the latest being AN AEGEAN APRIL, which Library Journal awarded a starred review saying, “vividly depicts the political and economic issues involved in the European refugee crisis… outstanding crime novel.”  It's been a remarkable journey, punctuated most notably by The New York Times selecting the fourth in my Andreas Kaldis series (Target: Tinos) as one of its five “picks for the beach” while calling the entire series, “thoughtful police procedurals set in picturesque but not untroubled Greek locales;”

Left Coast Crime's nomination of the fifth in the series (Mykonos After Midnight) in 2014 as Best Mystery in a Foreign Setting; a 2016 Barry Award Best Novel Nomination for my seventh (Devil of Delphi); starred reviews and official government citations; and a mention in Fodor's Greek Islands Travel Guide under a section titled “Mykonos After Dark” that I consider equivalent to winning an Oscar ☺ —"Some say that after midnight, Mykonos is all nightlife—this throbbing beat is the backdrop to Jeffrey Siger's popular mystery, Murder in Mykonos."

My work is published in the US, UK, Germany (German), and Greece (Greek and English), and I'm honored to have served as Chair of the National Board of Bouchercon World Mystery Convention, and as Adjunct Professor of English at Washington & Jefferson College, teaching mystery writing.


One half of each year on Mykonos, the balance based at my farm outside of New York City.

My mystery-thrillers are told against the backdrop of traditional Greek life in different Greek locales. They are aimed at exploring serious societal issues confronting modern day Greece in a tell-it-like-it-is style while touching upon the country's ancient roots.  At the heart of each book lay some modern-day upheaval or other uncomfortable subject that most writers prefer to avoid, yet is precisely the sort of issue I promised myself to address when I changed careers.

My original goal was to write a stand-alone novel telling the story of an island I knew intimately.  I wanted to talk about Mykonos’ people, culture and politics and only settled upon the mystery format because it struck me as the best vehicle for exploring how a tourist island society might respond to a threat to its newfound economic glory.  With the success of my debut novel, and a three-book deal for a series, I quickly realized I had an inexhaustible number of topics and venues to explore in Greece.  After all, it is the birthplace of the gods, the cradle of European civilization, the bridge between East and West.  Spartan courage, Athenian democracy, Olympic achievement, and Trojan intrigue all call it home. On top of all that, what tantalized me as a writer working on the edge of societal change, was how many of the great issues confronting our modern world were centered in Greece’s Mediterranean neighborhood. Indeed, I’d venture to say no western country is closer to what challenges our planet than Greece.


Honestly, they find me. It’s uncanny how something I read, hear, or experience just sparks a thought that leads to an idea for a book. It’s that strange alchemy called inspiration , something I can’t put my finger on, or dare risk over-analyzing out of fear all might simply vanish into that same thin air as now gives rise to my ideas.

6. How long does it take you to write a book?

I’ve done a book a year for the past ten years, so I guess the answer is a year.

7. How do you go about writing, that is to say, are you organised, do your research, disciplined, are you a messy sort who gets it done one way or another?

I am very disciplined in my research and writing. I suspect it comes from all those years practicing law.  When I’m into my writing mode of 1000 finished words a day, my friends on Mykonos will tell you that no matter what tempting high season distraction might be out there, I cannot be lured away from my keyboard until my 1000 words are finished. But once they are….

8. What do you enjoy most about writing?

I am a seat-of-the-pants writer, meaning I have no idea what will end up on paper once I put my butt in the chair and start typing.  I leave it to my characters to take me in the direction they believe works best for the story. Frankly, I’m just along for the ride.  The excitement of learning what my characters have in store for me each day is sheer joy.

9. What, in your view, is/has been the greatest gift from Greece to the world?

10. Which other authors do you read?

I’m a great fan of Cormac McCarthy, Arthur Conan Doyle, John Steinbeck, August Wilson (really a playwright), Robert Frost (yes, the poet), all the mystery writing folk at Poisoned Pen Press, and my blogmates at Murder is Everywhere where I write a post about Greece every Saturday.

11. What's your preferred kind of music?

12. Do you like Greek music and if so, which kind?

Octopodi prepared and grilled next to the sea where it's caught, together with achinos collected by friends who remembered to bring along bread, olive oil and plenty of tsipouro.

14. Favourite place in Greece and the reason(s)?

Mykonos. As crazy as it’s become during tourist season, it’s where my friends, my heart, and my fondest memories remain, and where I spend more time than any other place on earth. 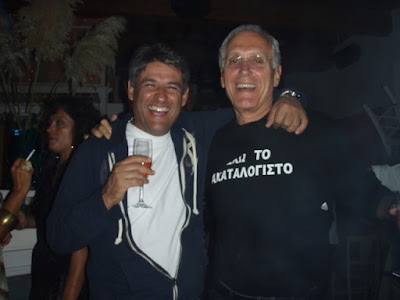 I prefer real books, but practicalities—such as the virtually absence of English-language new releases in Greece—makes a Kindle a necessity for me.

16. In as few words as possible, tell someone who's never been to Greece why they should go.

To forever change your view of life for the better.

17. What links would you like the readers to explore in connection with your work, including, of course, sites where your work may be purchased?


There you go folks. I think you'll agree it was well worth the wait. By all means share this if you know anyone else who'd like to read Jeffrey's interview. 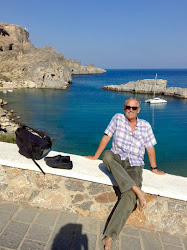 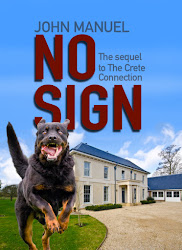